The signs of an early Fall?

Victoria Erickson once said “If a year was tucked inside of a clock, then autumn would be the magic hour.”

After being here for a few years, you begin to see a few signs and listen to the old timers talk about what they are seeing.  This weather folklore is passed down from generation to generation and mostly based on what was noticed and shared in a community to prepare them for what could be coming.  After all the Famers Almanac did not come out until 1818 and even then it was not widely available. So great grandpa shared with grandpa, who told dad and so it went way, way back.

As the calendar turns to August, the natural world begins to show us signs of what is to come and maybe even when.  As hot and dry as the first part of July was, the first part of August is showing us favor.  Mid 70 daytime temps and low 60 night time temps.  Although we know this is not going to remain with us, some of the “signs” are pointing at an early fall.

I am an early riser and there has been a good deal of fog as the sun comes up for the past week or so. Legend has it that for every foggy morning in August, there will be a snowfall during the winter. Is this really true? Attempts to analyze figures in one small North Carolina town found that it didn’t hold up, but no large-scale studies have been done.

The acorns are beginning to hit the ground in numbers and the squirrels are active. As the saying goes: “Squirrels gathering nuts in a flurry, Will cause snow to gather in a hurry.”

This past weekend I saw the webworms begin their nestings.  As they are dining on the drier leaves, it is said that when they appear early, autumn is on its way soon.  One of my favorite worm predictions is the woolly worms.  According to folklore, the black-and-brown caterpillars of the tiger moth species can predict just how cold and snowy it’s going to be for the upcoming winter when spotted during the fall season. The caterpillars have black bands at each end of their bodies, and a reddish-brown section in the center. Folk wisdom has it that when the brown band is narrow, winter weather will be harsh.  There have even been studies done on it.

The katydids have been singing loud and proud.  They do come with their own weather lore

Well it seems with all of this going on and some small color changes happening in our area, we may yet see an early fall.  Myself, I would love to see it happen from August to November.  Two things are sure to happen, the apples will ripen soon and the color burst will astound us all. 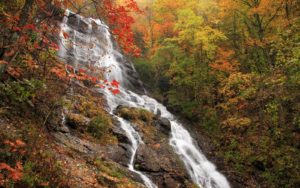 When will the best color show?  Keep an eye on the Leaf Watch, 2019 should be up and posting soon.

WELCOME TO THE MOUNTAINS