Getting the pantry ready for fall

The beginning of Cherokee culture is identified with the cultivation of corn by the native people in the Southern Appalachians more than a thousand years ago.

From the earliest times in Cherokee history, the raising of corn was interwoven with the spiritual beliefs of the people. Indeed, the Cherokee name for corn—”selu”—is also the name of the First Woman in Cherokee creation stories.

Cherokee villages were surrounded by vast cornfields while gardens were planted beside rivers and streams. In addition to corn, the Cherokee grew beans, squash, sunflowers, pumpkins, and other crops. Cherokee women were the primary farmers.  “The Three Sisters” were staples in the Cherokee diet–corn, beans and squash. The sisters were grown close together in a type of companion planting. The corn stalks provided natural trellises for climbing pole beans, the nitrogen-fixing beans returned fertility to the plot at the end of the season to feed next year’s corn, and the low-growing winter squash vines shaded out weeds and helped keep the soil cool and moist.

“The last essential step in raising a crop of corn was storing it and keeping it safe from field mice and other animals. In some places, (they) stored their corn in cribs raised seven or eight feet from the ground on posts which were polished so mice could not climb them. The crib itself was plastered inside and out with mud. The only entrance was a small door which was sealed with mud each time it was used. They stacked the ears of corn in rows, with the better corn near the back of the crib, and the poorer corn near the entrance where it could be used first. In other places, “they” stored their corn in special rooms in the houses in which they lived.” … “sometimes… ears of dried corn “were protected from insects by wrapping each one with grass and then plastering it all over with wet clay mixed with grass. In this manner they were able to keep corn from one year to another.” (Hudson, 292-299**). After the arrival of Europeans, the Cherokee began growing peaches and watermelons acquired through trade. Cherokees began keeping and breeding horses circa 1720, and by the mid-1700s they were growing apples from Europe, black-eyed peas from Africa, and sweet potatoes from the Caribbean. Eventually, cattle were included among Cherokee livestock.

The Hiawassee River begins at the crest of Unicoi Gap in the southern edge of the county then flows across its full length. In North Carolina and Tennessee, Hiwassee is the spelling of the river’s name. That was also its spelling in Georgia in the 1800s. The Tallulah River begins on the east slope of the Nantahala Mountains in North Carolina then flows across the northeastern corner of Towns County.

Trout and other fish were often smoked to preserve it for later consumption. Once gutted, the entire fish was often placed over a low fire that included a great many green branches, so that the heat and smoke would dry out the fish meat.

A fish weir, by definition, is a low dam built across a river to raise the level of water upstream or regulate its flow; an enclosure of stakes set in a stream as a trap for fish. 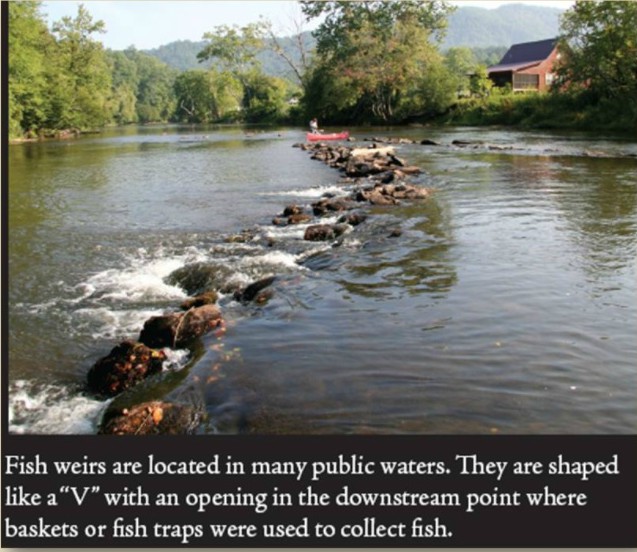 Of all the activities enjoyed by the Cherokee, the fall hunt was always eagerly anticipated. Yes, even in Georgia!  Old buffalo trail crosses the gap between Rich Mountain and Snake Mountain just north of Boone NC.  Some of the most important animal and native trails became packhorse trading routes and wagon roads. These include the Unicoi Turnpike and the Old Federal Road corridors.

Most other types of meat were cut into long strips and the fat removed. The fat was placed in cooking “pots.” If it was the beginning of the hot, dry season, meat would then be placed on rocks or racks made from tree branches so that it would dry in the sunlight. Again, children and the elderly did their share of work by fanning away flies, insects and marauding animals such as dogs or raccoons. If time was short, the meat was sometimes dried and/or smoked under a very low fire. This dried meat is typically referred to as “jerky.” It could be made soft again by cooking it in a soup and was often served along with other vegetables.

I hope you enjoyed hearing a little about how some of The People spent their fall season getting foods ready to winter over.  As always, we thank you for your time spent with us and as always

Welcome to the Mountains