Independence, the State of Franklin

The self-proclaimed State of Franklin broke away from North Carolina and attempted an experiment at self-rule, in a dispute over land grants and sovereignty 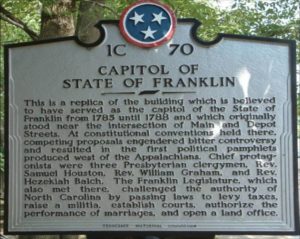 In June 1784, the North Carolina state government agreed to cede three of its western counties to the Confederation Congress as a way to make it easier for land speculators to acquire property there.  The three counties’ residents met in Jonesborough that August to declare their own independent legal state, separate from North Carolina and the State of Frankland was born.

The counties petitioned for statehood as “Frankland” to the United States Congress. A simple majority of states favored acceptance of the petition, but it fell short of the two-thirds majority needed to pass, even after the counties’ changed their proposed name to “Franklin” in an attempt to curry Benjamin Franklin’s and others’ favor.

The State of Franklin’s leaders wrote their own Declaration of Independence and proposed a draft constitution in December 1784 and chose John Sevier, a Revolutionary War veteran, as governor.

The new legislature made peace treaties with the Native American tribes in the area (with few exceptions, the most notable being the Chickamauga Cherokee). The Cherokee claim to sovereignty over much of the area of southern Franklin, though already occupied by whites, was maintained at the 1785 Treaty of Hopewell with the Federal government. In 1786, Samuel Wear helped negotiate the competing Treaty of Coyatee on behalf of the State of Franklin. Coyattee re-affirmed the 1785 Treaty of Dumplin which the republic had secured from the Cherokee, and which Dragging Canoe‘s Chickamauga faction had refused to recognize. The new treaty extended the area for white settlement almost as far south as the Little Tennessee River, along which the main “Overhill Cherokee” towns were located.[9] The Cherokee did not formally relinquish their claim to this territory to the U.S. until the July 1791 Treaty of Holston[10] and even then, hostilities continued in the area for years afterward. 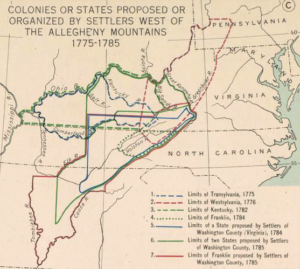 After the dissolution of the State of Franklin in February 1789, continued support of the separate state movement was confined largely to Sevier County, specifically in the country south of the French Broad River. The people there realized that the only entity recognizing title to their land holdings had been Franklin. Both North Carolina and the Federal (Confederation) government supported the Cherokee claims as set forth in the Treaty of Hopewell, and considered settlers in the area “squatters“. This led to the formation of a “Lesser Franklin” government, with an Articles of Association similar to the earlier Watauga Constitution. In 1789 these Articles were adopted at Newell’s Station, which served as the seat of government for the wider area of Lesser Franklin, including all the settled country south of the French Broad.

The Lesser Franklin government finally ended in 1791, when Governor William Blount, of the newly formed Southwest Territory, met the Cherokee chieftains on the site of the future Knoxville, and they made the Treaty of Holston. The Overhill Cherokee now acknowledged the authority of the United States government, and ceded to the Federal government all of their lands south of the French Broad, almost as far as the Little Tennessee River.  I want to thank each of the areas that are hyperlinked as they have all helped me write this and place the links to allow you to continue to research this topic.

So as we near our Independence Day, please stop to think of all that went into making this “one nation under God”.  We did not always get along nor did we always agree with one another.  History shows that sometimes we were cruel to one another and the sign of the times was that, sometimes we accepted that.

As the nation matured so did we, as a people.  Appreciate our past for what it is, simply the building blocks that brought us where we are today.  Just as today will teach us more about who we want to be tomorrow.

Happy 4th of July, thank you for spending some time with us today and as always…

WELCOME TO THE MOUNTAINS