MEMORIAL DAY IN THE GEORGIA MOUNTAINS

As Memorial Day comes upon us, I often think of those that have gone before us.  Coming from a military family, I learned what this “holiday” was all about at an early age.  As I grew older I began to understand that it was not just those world wars that changed our history.  As the country that shared the concept of freedom with the world, our own independence is often overlooked on this holiday.

Georgia had many unique roles to play in our war of independence.  We were the most southern of the 13 colonies, we shared only one border with the colonies.  We were also the least populated.  Surrounded by French to the west, Spanish to the south and within our borders we had both Creek and Cherokee nations.

The Georgians were mostly satisfied with the Royal Governor James Wright (1761-1776), the economy had done well under his watch.   The West Indies and England were both vital markets to Georgia, and many of our major products were used by the English navy.  As Britain passed more and more restrictive trade barriers, our Loyalist population began to grow.   As events to the north began to lead to war with Britain, Georgia disposed of Royal Governor James Wright and elected a new government.

On July 4, 1776 the Declaration of Independence was enacted, with Lyman Hall, George Walton and Button Gwinnett signing for the state of Georgia. It would take a month for Georgians to find out that all three of their representatives voted for the document and what the document said. Major battles involving Georgians (Battle of the Rice Boats, Fort Moultrie) had already been fought.

Here in North Georgia there is a little known hero that we never hear about, Nancy (Nan-Ye-Hi) Ward.  “Nanyehi, who adopted the English name Nancy Ward, was a Cherokee princess who earned the name of Ghighau or “Beloved Woman” at 17 years of age for her role in leading Cherokee warriors to victory. Ward was born around 1738 and died in 1822 near Benton.

In the Battle of Taliwa, which took place in 1775, she fought alongside her husband, Kingfisher.  After he was fatally wounded, she took his place in battle.  Her act of bravery elevated Ward onto the Council of Chiefs and the Cherokee Women’s Council. Her status gave her complete power over prisoners.   In one instance, she used her influence among the Cherokee to rescue a captured white woman, Lydia Bean, from being burned at the stake. Bean then stayed with Ward as her guest until it was safe for her to return home. While there, Ward asked Bean to teach the Cherokee how to make butter and cheese. Ward later bought cattle and introduced cows and dairy products into the Cherokee economy.  Mrs. Bean also taught Ward how to set up a loom, spin thread and yarn, and weave cloth.

Ward’s cousin, Dragging Canoe, wanted to ally with the British against the settlers but the Cherokees’ Beloved Woman was trying to support them. In May 1775, a group of Delaware, Mohawk and Shawnee emissaries formed a delegation which headed south to support the British who were trying to gain the help of the Cherokees and other tribes. In July of the same year, Dragging Canoe led the Chickamauga Cherokee band in attacks against the European-American settlements and forts located in the Appalachians and other isolated areas of the region. State militias retaliated destroying Native villages and crops and forced the tribe to give up more of their land by 1777.

In July 1776, Ward, who was aiming for a peaceful resolution, warned a group of white settlers living near the Holston River and on the Virginia border about an imminent attack of her people.

The British supported Dragging Canoe’s war against the settlers supplying weapons but in 1778, 700 soldiers under Colonel Evan Shelby attacked his territory and limited the Cherokee resistance to a minor conflict.

In 1780, Ward continued warning American soldiers of attacks trying to prevent retaliations against her people. According to Harold Felton she even sent food in form of cattle to the starving militia. Her efforts couldn’t prevent another invasion of the Cherokee territory by the North Carolina militia, who destroyed more villages demanding further land cessions. Ward and her family were captured in the battle but they were eventually released.

Nanyehi or Nancy later married English trader Bryant Ward, learned to speak English, and became a trusted liaison between the Cherokee and the newly arriving white settlers. As she came to understand more about the Anglo-American ways, she came to believe the best way for the Cherokee to survive was to co-exist with the white settlers.  Ward earned a reputation as a determined advocate of human rights and peace.

Ward was the last to be given the title of “Beloved Woman” by the Cherokees.   When she died, her son said he saw a white light leave her body.”

In 1923, the Nancy Ward Chapter DAR of Chattanooga erected a monument at her gravesite, and DAR members continue to landscape the surrounding area with trees, flowers, and medicinal beds. A new marker was placed and dedicated during the Dedication Day ceremonies by the Cherokee District Chapters DAR and is inscribed as follows:

“In honor of Nancy ‘Nanyehi’ Ward, 1738-1822, Beloved Woman of the Cherokee,In appreciation for her contribution to her culture and her people, Daughters of the American Revolution, Cherokee District Chapters.

The Association of the Descendants of Nancy Ward also dedicated a new marker inscribed with the names and dates of Nancy Ward ‘Nanyehi,’ her son Five Killer, and her brother, Longfellow. A group of her descendants traveled here from Oklahoma for Dedication Day. 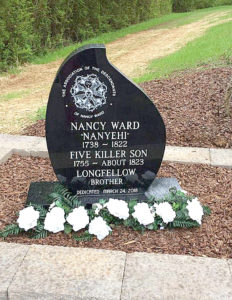 A special thank you to the Cleveland Banner for information about this amazing American Hero.